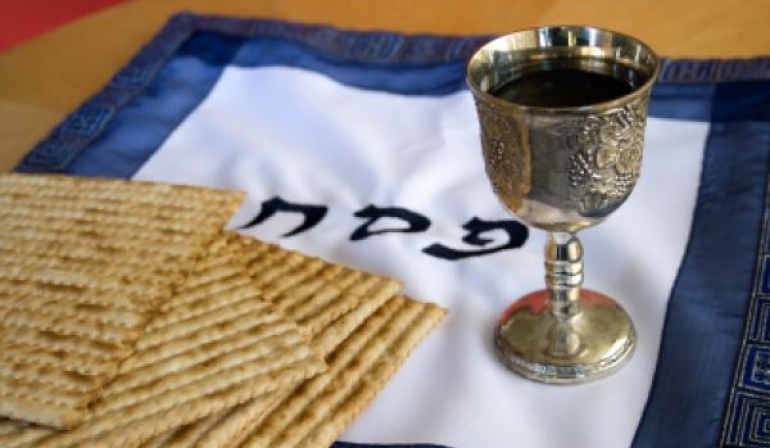 Numbers 33:2 Moses recorded their starting places according to their journeys by the command of [lit. Yahoah], and these are their journeys according to their starting places. 3 They journeyed from Rameses in the first month, on the fifteenth day of the first month; on the next day after the Passover the sons of Israel started out boldly in the sight of all the Egyptians, 4 while the Egyptians were burying all their firstborn whom [lit. Yahoah] had struck down among them. [Lit. Yahoah] had also executed judgments on their gods. (NASB 1995)

Notice in the time of the Exodus that the Passover was clearly the day before the fifteenth in the first month (i.e., 14 Abib); this was corrupted much later under rabbinic Judaism as the Passover became confused with the first day of the Feast of Unleavened Bread (Heb. Chag HaMatzot) on 15 Nisan.

Also note that the Law (Heb. Torah) had not been given to Moses (Heb. Moshe) at this time as 15 Abib became an annual or high Sabbath to serve as a day of remembrance. But once given, here is the Law:

Note that the first (15 Abib) and seventh (21 Abib) days of Unleavened Bread are holy convocations or annual/high Sabbaths.  15 Abib marked the first of three nights (evenings) and days (mornings) that Christ was dead and buried:

Matthew 12:39 But He answered and said to them, “An evil and adulterous generation craves for a sign; and yet no sign will be given to it but the sign of Jonah the prophet; 40 for just as Jonah was three days and three nights in the belly of the sea monster, so will the Son of Man be three days and three nights in the heart of the earth. (NASB 1995)

Again, I challenge ANYONE to explain how there can be a third night if Christ were crucified on Good Friday and resurrected on Easter/Resurrection Sunday morning.  Folks, if Christ were a liar, then everything in this world is for naught.

Luke 23:54 It was the preparation day, and the Sabbath was about to begin. 55 Now the women who had come with Him out of Galilee followed, and saw the tomb and how His body was laid. 56 Then they returned and prepared spices and perfumes. And on the Sabbath they rested according to the commandment. (NASB 1995)

In verse 54, that Sabbath was the first day of Unleavened Bread on 15 Abib as the Passover/preparation day was drawing to a close and Christ was crucified and quickly buried. As it took time to purchase the ingredients to prepare the burial spices and perfumes, and they could not labor on 15 Abib as it was an annual Sabbath, those days were referencing 16-17 Abib (the second and third FULL “yomim” that Christ was buried). Then, they rested on the weekly Sabbath (18 Abib) in v56. How can this passage possibly be understood any other way?

The following took place in John 19:

John 19:38 After these things Joseph of Arimathea, being a disciple of Jesus, but a secret one for fear of the Jews, asked Pilate that he might take away the body of Jesus; and Pilate granted permission. So he came and took away His body. 39 Nicodemus, who had first come to Him by night, also came, bringing a mixture of myrrh and aloes, about a hundred pounds weight. 40 So they took the body of Jesus and bound it in linen wrappings with the spices, as is the burial custom of the Jews. 41 Now in the place where He was crucified there was a garden, and in the garden a new tomb in which no one had yet been laid. 42 Therefore because of the Jewish day of preparation, since the tomb was nearby, they laid Jesus there. (NASB 1995)

So, Christ’s body had at least initial preparation (and a LOT of it!) at the closing of the Passover/preparation day on 14 Abib based on the efforts of Joseph of Arimathea and Nicodemus.  Then, the Galilean women saw the tomb and where his body was laid when the (annual) Sabbath was about to begin. Next, they left — and RETURNED with prepared spices and perfumes.  How does this all “magically” occur late in the day on Passover?  In two words: IT DOESN’T!  How can we know with certainty?  The very next verse in Luke:

Luke 24:1 But on the first day of the week, at early dawn, they came to the tomb bringing the spices which they had prepared. (NASB 1995)

Be sure to read the companion articles in the Mo’edim (appointed times), Agricultural Feasts, and Passover/Unleavened Bread series: